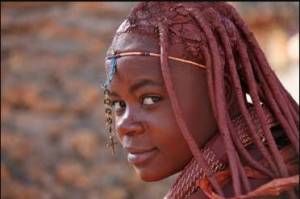 Gistafrika which is an entertainment and cultural blog which digs deep into the carcass of Africa tradition and history, today we will be talking about this strange but interesting people in Africa.

Africa is still considered a third world, and although most of its cities are joining the global village, some are still holding back. Today, we take you to the Southern part of Africa — Namibia, precisely.

One example is Himba people. They live in the Kunene region of Namibia. These people have cultures that members of the first world might frown upon. They live in isolation, away from external contacts. They sleep with their guests for free, and they lace their children’s neck with heavy beads. Polygamy is also highly encouraged. These people mostly worship their old gods.

One of the most astonishing things about them is that they don’t take their baths. But this is largely due to the harsh climatic condition in their desert region and the unavailability of water. Black is beautiful, right?

The women are beautiful regardless. They maintain personal hygiene by applying red ochre on their skins and smoking themselves. They do this by dropping a charcoal in a bowl filled with herbs, they bend over it and the heat causes them to sweat thereby washing their body.Even though they don’t want people to interfere with their culture, they are friendly to visitors.