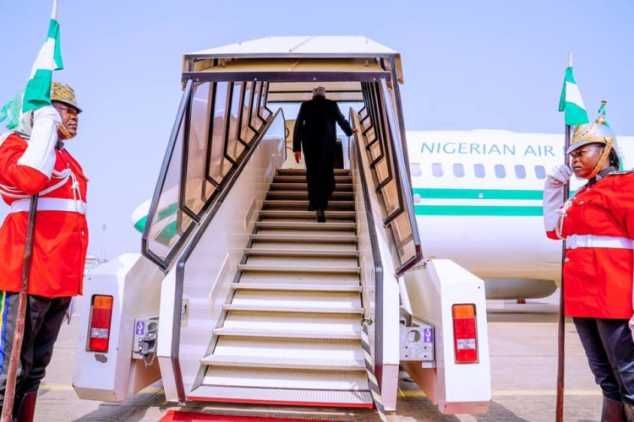 President Muhammadu Buhari has departed for the Ethiopian capital, Addis Ababa, to attend the thirty-third Ordinary Session of Heads of State and Government of the African Union (AU).

This was revealed in a statement by Senior Special Assistant to the President on Media and Publicity, Garba Shehu on Friday.According to the statement, Buhari will be with other leaders from the 55-country organization for the AU Summit with the theme, “Silencing the Guns: Creating Conducive Conditions for Africa’s Development.”During the Summit, the Nigerian leader will take part in the 29th Forum of Heads of Stateand Government of Participating States of the African Peer Review Mechanism (APRM) and the 27th Session of New Partnership for Africa’s Development (NEPAD) Heads of State and Government Orientation Committee (AUDA-NEPAD).

The statement further noted that these meetings will precede the 33rd Ordinary Session of the Assembly.“In Nigeria’s capacity as a member of the AU Peace and Security Council, President Buhari will participate in the High-Level meeting of the Peace and Security Council on the situation in the Sahel and Libya, and High-Level Ad-Hoc Committee on South Sudan,” the statement further said.Also, on the margins of the Summit, Buhari will deliver a keynote speech at a High-Level Side Event on “Stop the War on Children: Dividend of Silencing the Guns.”It added that “The President will also hold bilateral meetings with several world leaders on the margins of the Summit.“At the end of the AU Summit on February 10,the Nigerian President will commence a State Visit to Ethiopia on February 11, at the invitation of the Ethiopian Prime Minister, Dr Abiy Ahmed.”