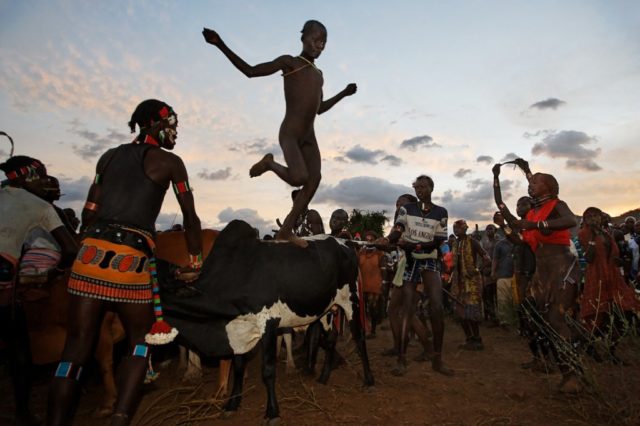 The Hamar tribe are found around the bush covered hills in the the eastern part of the Omo Valley in southern Ethiopia. They have unique rituals such as a bull jumping ceremony that men go through in order to reach adulthood, whereupon young Hamar women get whipped to prove their love for their kinsmen.

As it is with many other African traditions, the Hamar tribe is not an exception in the transition to adulthood. In achieving Manhood in Ethiopia, boys must undergo two different rituals: circumcision of the boy child, which happens when a boy loses his baby teeth, and a leap over the bulls.

Successful fulfillment of these two rituals enables boys to transfer from boyhood (naasi), to uninitiated (ukuli), to unmarried adult (maz).

Bull Jumping is believed to be done as a sign of rebirth and transition of a boy into manhood and there are several stages of the initiation process. 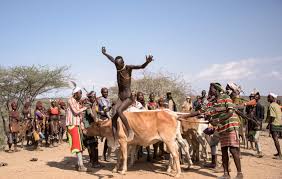 On the day of the ceremony, female relatives of the young jumpers assemble themselves in a circle, dress-up with beaded necklaces, iron coils around their arms, and decorate their skin with cowry shells.

Some wear iron torques around their necks known as ensente, which indicate the wealth and prestige of the woman’s husband.

To a chorus of bells and screaming horns, the women circle the men, jumping and dancing to the beat. Suddenly, a woman abandons the dancing group. She begins to heckle the young topless man, yelling insults at him.

Thereupon these women get whipped to prove their love for their kinsmen. The hostility rises until he lifts the tree branch in his hand and delivers a forceful whip to her body. Visibly bleeding, the woman continues hurling abuse at the young man, shouting for all to hear that he didn’t whip her hard enough to provoke him further. 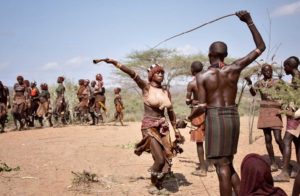 These women, who are related to the young jumper, endure this pain as a symbol of devotion to the jumper and the elders, and to show their loyalty to the tribe.

Hamar Tribe Bull Jumping Ritual, The tradition is known as Ukuli Bula and their sacrifice and devotion to the jumper are recognized and returned. Castrated cattle are then herded into the center of the celebration space and the women continue their dancing and horn blowing, circling the herd. A nervous ukuli appears.

The young jumper is put into a circle of men and the ritual begins.

ABOUT US
Gistafrika is your news, entertainment, music and fashion website. We provide you with the latest breaking news and videos straight from the entertainment industry. Stay close to see what's new and get ready to be amazed by the best quality information available.
Contact us: gistafrika@gmail.com
FOLLOW US
© Designed by A.J
Manage Cookie Consent
Our websites cookies to optimize our services. By continuing, you agree to their use. Learn more, including how to control cookies
Manage options Manage services Manage vendors Read more about these purposes
View preferences
{title} {title} {title}