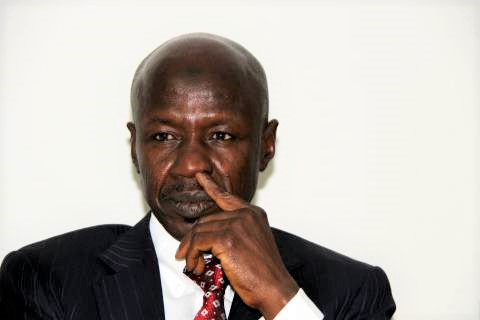 The Acting Chairman of Economic and Financial Crimes Commission (EFCC) Ibrahim Magu have been Arrested by a combined team of Department of State Services (DSS) and Police.

Ibrahim Magu was arrested at his resident in wuse II in Abuja where DSS says his living a lavish lifestyle sponsored by one Umar Mohammed who have been DSS net before.

According to reports Ibrahim Magu is currently living in a rented apartment for N40m at N20m per annum. This accommodation was not paid [for] from the commission’s finances, but by one Umar Mohammed, air commodore retired, who is allegedly involve in shady deals.

“For the furnishing of the residence, Ibrahim Magu enlisted the Federal Capital Development Authority to award a contract to Africa Energy, a company owned by the same Mohammed, to furnish the residence at the cost of N43m.

“Investigations show that the acting EFCC chairman regularly embarked on official and private trips through a private jet owned by Mohammed.

“Furthermore, the EFCC boss has so far maintained a high-profile lifestyle. This is exemplified by his preference for first-class air travels. On 24 June, 2016, he flew Emirate airlines first-class to Saudi Arabia to perform lesser hajj at the cost of N2.9m. This is in spite of Mr President’s directive to all public servants to fly economy class.

DSS said that the Acting Chairman “Magu” has fostered a beneficial relationship with Mohammed who by his confession approaches clients for possible exploitation, favours and associated returns.

According to report, it is unclear why the Department of State Service (DSS) Choose to arrest Magu when he could have invited to the committee without any show of force.

5 Siblings of Nadia Buari that are into Entertainment industry

Poem of the Day: ETERNITY